This morning, I was passively listening to NPR's On the Media when I heard the person being interviewed say

As I've blogged before, I'm susceptible to noticing [ʌi] showing up in strange places. But, this token was not of the usual type for me. Usually I hear [ʌi] as a raised variant of the phoneme /ay/, as in "bike" or "rice" or "write." But in this case, [ʌi] was a realization of an r-colored schwa, as in "bird", or more commonly "thirty-third."

"[tʌi]ty-[tʌi]d" for "thirty-third" is a known and old variable of New York City speech. As far as I know, it has been receding along with some other socially recognized markers of NYC speech, like r-lessness, although I don't know the most recent scholarship on this particular variable.

So, I thought I was listening to an interview with an old-school New Yorker. But then, I started hearing all of these Southern features, specifically monophthongization of /oy/ in "t[ɔ]let tissue" and of /ay/ in "div[a]d." Mysterious, no?

No! I recalled seeing a paper presented by Thea Strand, Michael Wroblewski & Mark K. Good called "Words, wuds, woids': Variation in BIRD realization in Southern Louisiana at the NWAV 36 conference. In fact, [ʌi] for r-colored schwa is also a feature of African American speech in southern Louisiana. I looked up the show piece, and the biography of the interviewee. Wilbert Rideau (Wikipedia, personal website) was the editor of the first (and only?) uncensored prison publication, and he grew up in in Lake Charles, LA.

Check out the OTM piece. Rideau is a wonderful dialect speaker, and his story is very interesting.

*Disclaimer* I am not a demographer. I am a linguist. Yet, I do pretty ok with quantitative data, and visual display thereof. Therefore, I feel at least equally qualified as the AOL News Contributor who reported "White Population Dwindling as Calif. Grows."

Apparently there has been a trend for White Californians to move out of the state. The important bit of data:

[W]hites accounted for just under 41 percent of California's overall population in 2008, down from 47 percent in 2000.

The article also includes 3D pie charts representing the demographic breakdown of California in 2000 and 2008. These pie charts are object lessons in why you should never use pie charts. Go to the article, look at the pie charts. Now, without cheating (the data is displayed when you hover your mouse over), which group grew more, Asians or Blacks?

The article also links to the California Department of Finance report, which contains the raw data. I've downloaded this data, and carried out my own graphical analysis of it. 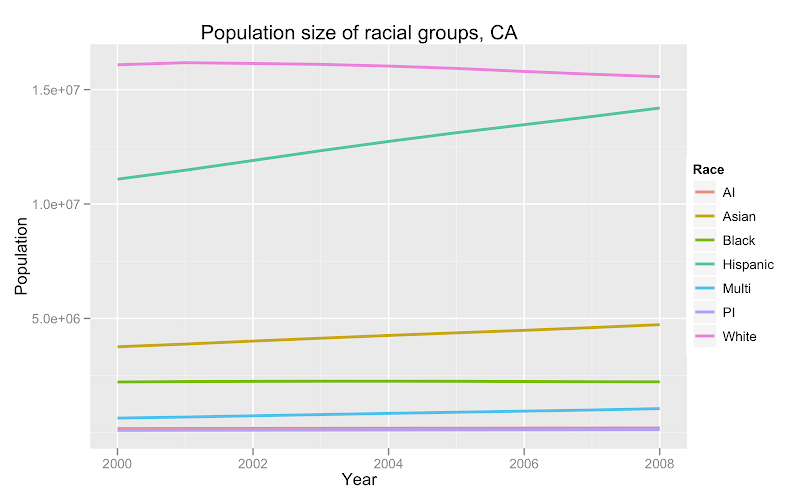 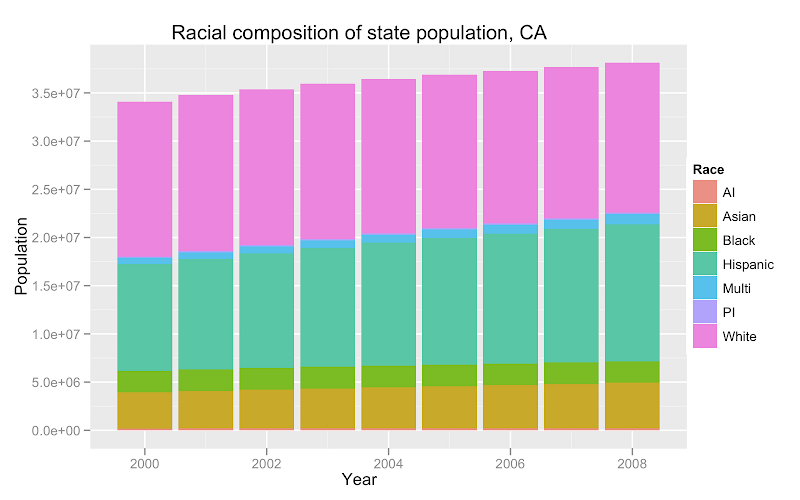 So, there's been a decrease in the size of the White population, but Whites are still the plurality of the state. Does this constitute a dwindling? I'm not much of a semanticist, so I'll just leave that point there.

So what's the big story here? I see two. First is the large increase in size of the Hispanic population. It's clear from Figure 1 that they are on track to become the plurality population in the state. The second is the increase of the Multiracial category. Figure 3 plots the %Annual Change within each group. 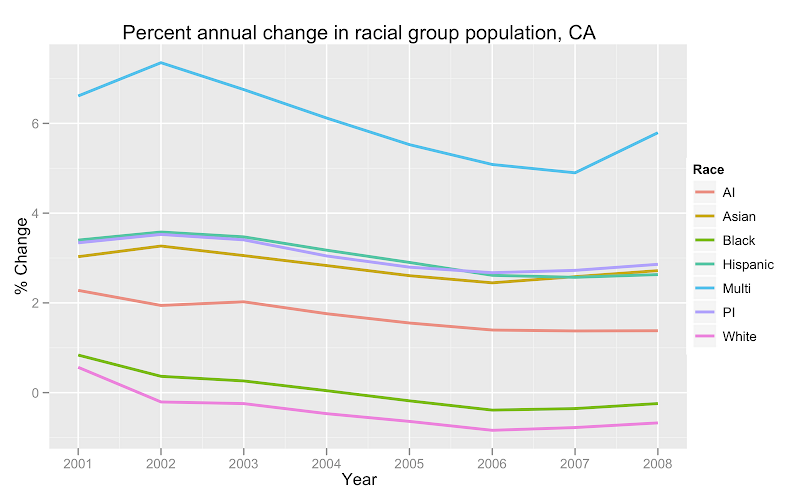 While Hispanics, Asians, and Pacific Islanders have been showing an average 3% annual increase in population size, the Multiracial group has been increasing by 6% annually.

Overlooking the big story in the data, overblowing a smaller effect, and producing that god awful pie chart are all symptoms of the same disease, I believe. It's what happens when you have a story, or an analysis first, then look at the data.
Posted by JoFrhwld at 12:41 AM 2 comments: