Q: What do you call a Labrador - Poodle cross breed?
A: A Labradoodle.

Q: What do you call a Golden Retriever - Poodle cross breed?
A: A Goldendoodle.

Not infrequently, I will hear someone from the UPenn community (undergrad / grad / faculty / staff) complain about how unsafe Philadelphia, or West Philadelphia is. For some reason, I always become defensively offensive in these conversations, and I'm not sure why. It's not just a Philly pride thing. I have a  different emotional response when someone says that New York is better than Philly, or that Philly is dirty, etc. Now, a recent police shootout with a carjacker on the West side of campus, leaving one of the carjackers dead, has brought this issue to the top of my mind. The whole incident began and ended within 10 minutes it appears, and the Department of Public Safety sent out an e-mail with some details of the event an hour later. The fact that many Penn students are angry that they didn't receive a text message sooner than that is raising that same feeling of defensive offence.

This post is about why I think I feel that way. I think it's likely to be unpopular. So, let me say from the outset that as a description of an emotional reaction of mine, it's probably unfair and biased in some ways, and I'm not trying to pass off the contents here as results or facts.

I think I get offensively defensive about the safety of Philadelphia when a Penn person talks about it for two reasons.

There are a few ways in which Penn students are specially privileged with regards to personal safety. Most strikingly, they have their own private police and security force with omnipresent patrols. They can call for walking escorts anywhere within the UPPD patrol zone. They have a special alert system to send text message warnings about possible and ongoing threats. These are some special services that regular Philadelphia citizens don't have, but there are also many other smaller details where Penn students benefit. For instance, pedestrianized areas on campus are almost universally well lit.

What all this means is that large amounts of time and energy are specially devoted to keeping Penn kids safe, special time and energy that typical Philadelphia citizens don't get.

Also, to say that Philadelphia is unsafe isn't very informative, because the unsafety is not uniformly distributed socially or geographically. Who is Philadelphia unsafe for? I grabbed 2009 homicide data from the Philadelphia Inquirer, and generated this histogram. 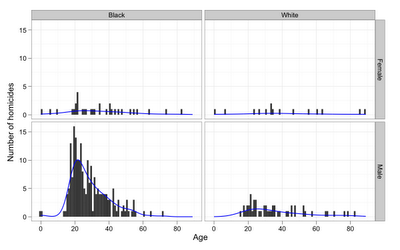 When it comes to homicide, it looks like Philadelphia is dangerous for young black men, like the one who was killed in the shoot out. 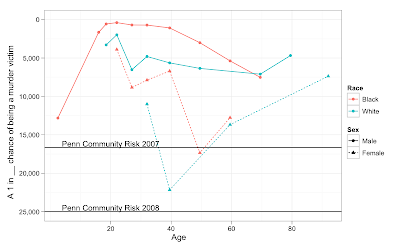 I think it's a fair criticism here to say that data on assault or sexual violence might look different. Certainly young black men wouldn't be at the highest risk for being rape victims. However, I'd be shocked that if for all kinds of violent crime, Penn students weren't many orders of magnitude less likely to be victims than normal Philadelphians.

What grates against my sense of propriety is how the people who objectively appear to be the safest in the city can worry so loudly about their personal safety, and feel entitled to so much, like informational text messages arriving sooner than one hour following an incident. There is a real problem of violence in this city, but Penn students are not its victims, and they already benefit from many special services devoted to their safety.

As for my second reason for getting worked up, everything is much more speculative. I just don't think that when the average Penn student says "Philadelphia isn't safe," they say so because they have been a victim of Philadelphia violence themselves, or know someone who has been, or even know the statistics of the area they're talking about. Instead, I think they're reporting some different kind of emotional reaction to Philadelphia.

There have been a few occasions in my life where I have been in the numerical racial minority, and have, for want of a better expression, felt my whiteness on me. I am fully aware that the fact that this is a rare enough event to be reportable is a function of my straight white cisgendered male privilege. The reason I bring it up at all is because I think I recognize the same kind of feeling in the Penn people who complain about the safety of Philadelphia. Just being in a city, or walking through some if its areas, perhaps they feel their whiteness (approx 55% of the student population) or upper middle classness (approx 70% of the student population from the top 10% income percentile) on them.

Maybe what I just said is true, and maybe it's not. Regardless, my own emotional reaction when a Penn person complains about safety is that their complaint is class based. What bothers me is not their own class consciousness, but rather their conclusion that there is a flaw in the city or their neighborhood that caused them to have this uncomfortable experience. Their presumption that a city and neighborhood most have never lived in ought to be a safe-space for them is offensive to me.

And that is how I feel about that.
Posted by JoFrhwld at 4:28 PM 2 comments:

As a sort of "for fun" side project, I've been looking at the Pennsylvania senate race results. The Democratic candidate, Joe Sestak, lost by a narrow margin to the Republican candidate, Pat Toomey. I've been kind of interested in the results because 1) it was such a close race, 2) I'm from Pennsylvania, 2) I'm from Philadelphia. As James Carville once said, "Pennsylvania is Philadelphia and Pittsburgh with Alabama in between," so these election returns could have an interesting distribution.

I got the county-by-county election returns from PA Department of State Website. So, first things first, here's a plot of how many votes each county contributed to each candidate. I've subtracted the Republican votes from the Democratic votes, so that the bars represent the margin of victory for each candidate in each county. The colors of the bars represent the size of the Republican or democratic skew by county (specifically, log(Democratic Votes / Republican Votes)). 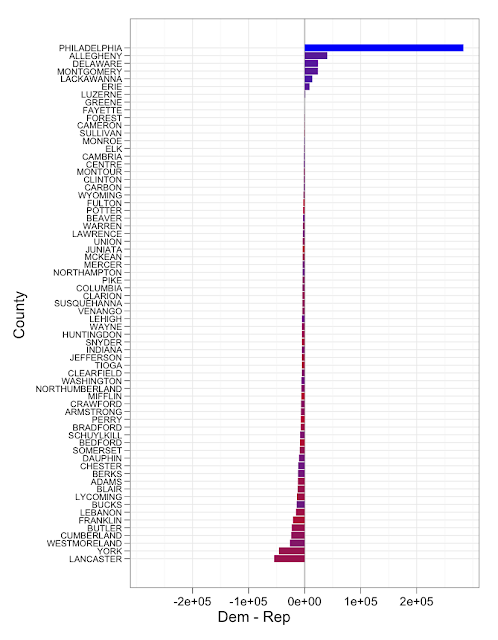 I know that population size is correlated with Democratic voting. So, I got voter registration data from the PA Recovery Act website, and merged it with the returns data. This figure plots the county population of registered voters by the Democratic skew in the county. I've also included a robust regression line, and labeled the most outlying counties (the top quartile of absolute residuals). 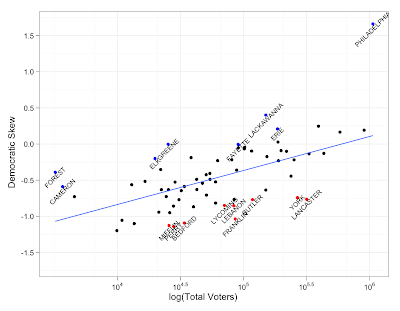 So, Democratic voting is correlated with population size, but Philadelphia is a huge outlier.

There was also a lot of talk about how Democrats were not energized to vote this election, so I wanted to see if you could see that effect in the data. I came up with a rough Democratic Turnout Skew number: log((Democratic Votes / Registered Democrats) / (Republican Votes / Registered Republicans)). Really, this should be based on exit polls, but I decided just to work with what I've got. The more positive this number, the more likely(-ish) a Democrat would be to vote than a Republican in that county, and the more negative, the more likely a Republican would be to vote than a Democrat. I compared this turnout skew to the Democratic Registration Skew: log(Registered Democrats / Registered Republicans).

Here's a plot of that data, with a local regression line (calculated excluding Philadelphia). 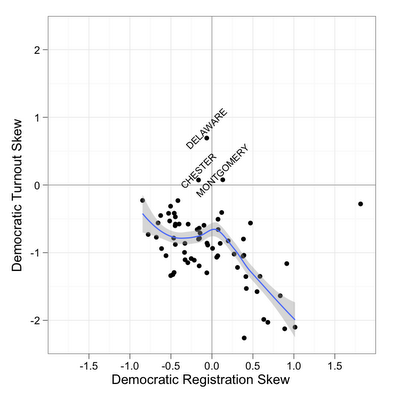 In almost all counties, Republicans were more likely to be voting than Democrats, except in the three labeled suburbs of Philadelphia. There seems to be no effect of the Democratic-ness of the county when Democrats are < 50%. However, when a county has more than 50% registered Democrats, Democratic turnout takes a nose dive compared to Republican turnout. This is either because Democrats are less motivated to vote (diffusion of responsibility?) or because Republicans were especially motivated to vote, or both. Again, Philadelphia is a strong outlier. 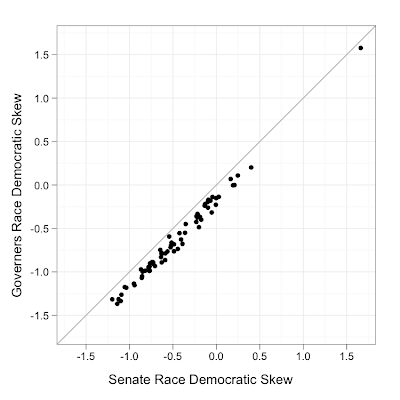 So, that is that.
Posted by JoFrhwld at 6:13 PM No comments:

Helo everyone, and welcome to today's episode of Can She Pass?, the game show where we see if she can, well, pass. Our contestant today is a young British girl from Season 1 of the Alfred Hitchcock Hour (original air date, April 19, 1963). While on vacation with her parents in Arizona, she gets accidentally kidnapped, driven south of the border, and witnesses a murder. She desperately wants to be reunited with her parents, and is on the run from the men who kidnapped her. As we meet her now, she has met a good Samaritan, a wonderful, down to earth all American boy who as agreed to sneak her across the border to America. All she has to do is not rouse the suspicion of the border patrol officer.

So everybody, let's ask ourselves: Can She Pass?

Oh no! That was a good faith attempt with "yep", but Americans don't say "r[ɑ]nch," at least not in the South West. You did not pass.
Posted by JoFrhwld at 2:56 PM No comments:

British comedians Steve Coogan and Rob Brydon (I don't really know them either) illustrate divergent approaches, and language policing thereof, in the stylistic context of Michael Caine speech... or something like that.

Posted by JoFrhwld at 5:55 PM No comments: