Hat tip to Mr. Verb for pointing out that the American Community Survey collects data on language spoken at home. I've downloaded their pre-compiled detailed spreadsheet, but you can generate custom tables broken down by various geographic granularities, along with all sorts of other demographic information at the American FactFinder website.

The data I downloaded had two data columns (excepting the margin of error estimates): Number of Speakers and Number who spoke English "Less than very well". Here are the top five languages other than English spoken at home, along with the English only numbers for comparison. The proportion column represents what proportion of all speakers surveyed each language represents.


"Chinese" represents people who wrote down "Chinese" as another language spoken at home. They also have reported numbers for Mandarin and Cantonese separately, but there's no way to apportion "Chinese" responses to one dialect or the other.

I wondered whether there was a relationship between how many speakers of a language there were, and how many of those speakers spoke English less than very well. You might think that the larger the available speech community for a non-English language, the less need for English there would be. 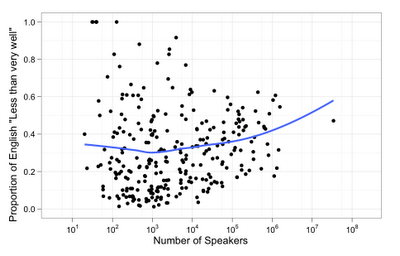 The answer (at the national level mind you) looks to be "maybe a little," but there's a lot of variation.
Posted by JoFrhwld at 1:28 PM 3 comments:

Grammar-phobia -or- judging a book by its cover.

I was walking through the University bookstore today to pick up beginning of the semester office supplies, when this book caught my eye: 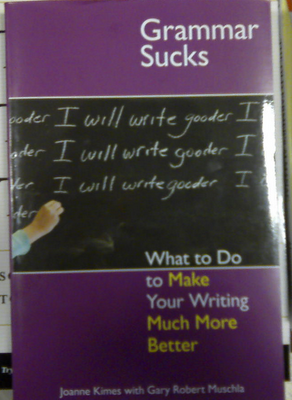 Grammar Sucks: What to Do to Make Your Writing Much More Better.

Right off the bat, the cover art is goofy. I am highly incredulous that there is a native speaker of English that does not know the comparative form of good is better, and if there were some speakers who regularly said or wrote gooder, it must be part of their native dialect, not a habitual speech or writing error. Morphological rules like that are part of the natural language system, and are not learned in school along with arbitrary orthographic conventions, like comma rules (which I actually never mastered).

The back of the book only got worse. 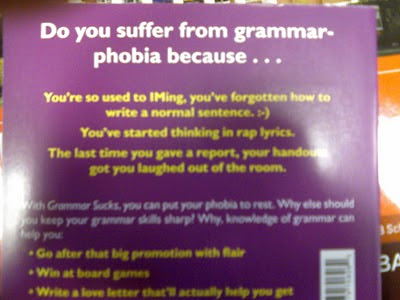 Do you suffer from grammar phobia because...


I won't start off by pointing out that the elided sentence at the beginning is clearly a question, and the three continuations underneath end in periods, not question marks, because that'd just be catty. ...oops.

What made this book seem blog-worthy to me is the not-so-subtle coded language used to refer to those speakers who the book cover authors (maybe not the book authors) feel are culpable for the degradation of... I don't really know what. Let's take them in turn.

So used to IMing

Some people are really bugged by text message abbreviations, like "c u l8r", probably because they don't understand the difference between the arbitrary orthographic system we use to encode spoken language and native linguistic competence. But my guess is that what really bugs a lot of them, and who this bullet point is really aimed at, is youth. While technology use like text messaging and instant messaging is diffusing up into older age groups, and the earliest adopters are getting older, the use of electronic communication like this is still solidly identified culturally as an activity of youth. Just how many sunday morning news stories have you heard about people who send thousands of text messages a month? Who do they always showcase? Teenaged girls.

But, let's take them at their word. Maybe you have grammar phobia because you're thinking in rap lyrics. Do you mean, like, you're freestyling in your head all the time? Do you mean you're kind of like this guy?

You mean, all your thoughts have flow, and rhyme, are creative, and drop properly formed Spanish imperative verbs? To the book cover authors: you fucking wish. I mean, I wish I could do that.

This isn't coded language for a demographic as far as I can tell, but coupled with the first two lines, it makes a clear point. If you are young, and black (and your hat's real low), you're not worthy of social respect, or economic achievement.

Needless to say, I went on to go buy my office supplies, and didn't read the body of the book. I can't really tell you if it gave any good advice that made any sense. This book is just another case where supposed discussion of language isn't really about language. It actually ties in nicely with my previous post on how people discuss language in terms of morality. Here, the book cover authors are laying blame on the same groups of people that are accused of leading moral decay: youth, and racial and ethnic minorities.
Posted by JoFrhwld at 11:03 PM No comments: