I've been getting into using a few different health tracking apps, and have been getting tired of needing to punch the same data into 3 different places every time I step on a scale. So, I was reasonably excited about the new Health app in iOS8, which would act as one central repository for this information that the individual apps could pull from. The fact that release of the HealthKit API has been delayed, meaning my 3 different health apps can't access the Health data yet, is disappointing, but I'm pretty patient about these things.

However, the Health app itself is really disappointing all on its own. It is not a success of data reporting or visualization. For example, here is what the record of the number of steps I've taken each day for the past month looks like. 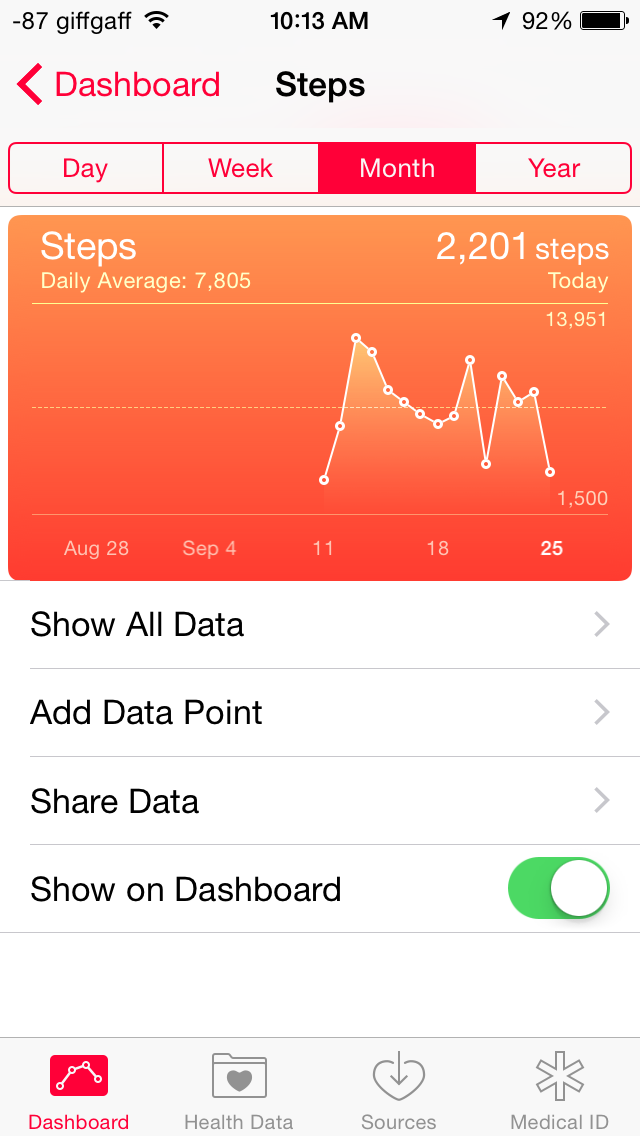 So, riddle me this: How many steps did I take yesterday? What was the date that I took the most steps? What day of the week was that weird dip? Not only are answers to basic questions like these not "glanceable," they are totally inaccessible. There is, in fact, no way within the Health app to find these answers, but back to that later.

Let's get a bit more detailed. What is the range of the y-axis. It looks like the bottom horizontal like corresponds to 1,500 steps. That's already a questionable data reporting decision. It should probably correspond to 0 steps. How about the top of the y-axis range? The top horizontal like looks like it corresponds to 13,951 steps, but I'm actually pretty sure that is the maximum number of steps in this data. But the maximum data point doesn't touch the top line?

But let's talk about how Apple really failed to meet baseline expectations with these graphs. When I realized I couldn't read the data precisely off the graph, my first instinct was to drag my finger across the line, assuming that more detailed contextual data would pop up. Sort of like how this Google Ngrams graph works. It should even work on mobile if you tap on it. Or, take this excellent bit of interactive visualization from the New York Times Upshot blog. Or any line graph out there with any bit of polish. Users are more or less trained by this point that hovering over line graphs activates some kind of additional contextual information, whether it's more detailed labeling, brushing, or like that NYT visualization, additional graphs! So you might expect that on the baddest touch screen device ever in the world (as Apple would have us believe), there's going to be some wild and crazy touch interaction, pinch-to-zoom pizzazz. Or at least it might have the same baseline functionality as some silly web widget that I can embed in my blog.

No such luck, and the data viz nerd in me sees this as one of the biggest missed opportunities I've seen in a while. It is just a static image, with some minimal transition animations when you switch between different time scales. If you tap on the graph, you get taken to the raw data, which looks like this. 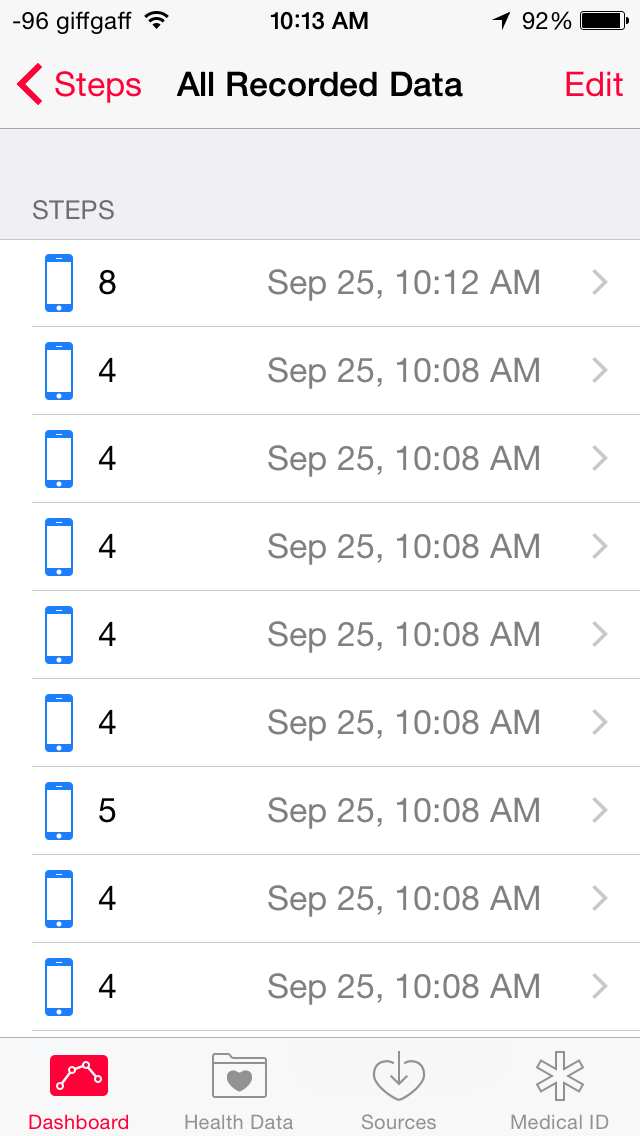 As far as I can tell, this is the really raw data offered up by the motion co-processor. Ludicrously, you can select and delete any individual bout of steps. So, if I felt that actually, one of the 8 groups of steps logged all in the minute of 10:08 AM was inaccurate, I could delete it!

What really frustrates me about the fact that I can see this data is that I can't touch it. Data at this granularity is pointless other than to show off the fact that there's a lot of it. It needs to a little bit aggregated before it gets interesting. And the fact that I don't like the Health visualizations as it is, I'd really go to town on this raw data. But conspicuously absent here is any export utility. I can look at, but not touch my own data. I guess I also couldn't access the data before iOS8, but they didn't waggle it tantalizingly in front of my nose like this!

So sure, maybe someone will make a third party app that will access the data from the HealthKit API and allow me to export it from there. As if what I'm really dying to do is clutter up my phone with an inevitably junky ad riddled app that contributes functionality that really should've been there in the first place.

To sum up, the static figures are poorly designed and minimally informative, but static figures are hardly what I would expect from a corporate entity like Apple anyway. On top of that, waving this raw data in my face is equal parts useless and infuriating.
Posted by JoFrhwld at 12:02 PM No comments: