I should really blog more often, instead of just when I feel compelled to slap down some nonsense, because the general tone of Val Systems turns towards scolding and away from my genuine positive passion for linguistics. That said, guess what I'm doing in this post! 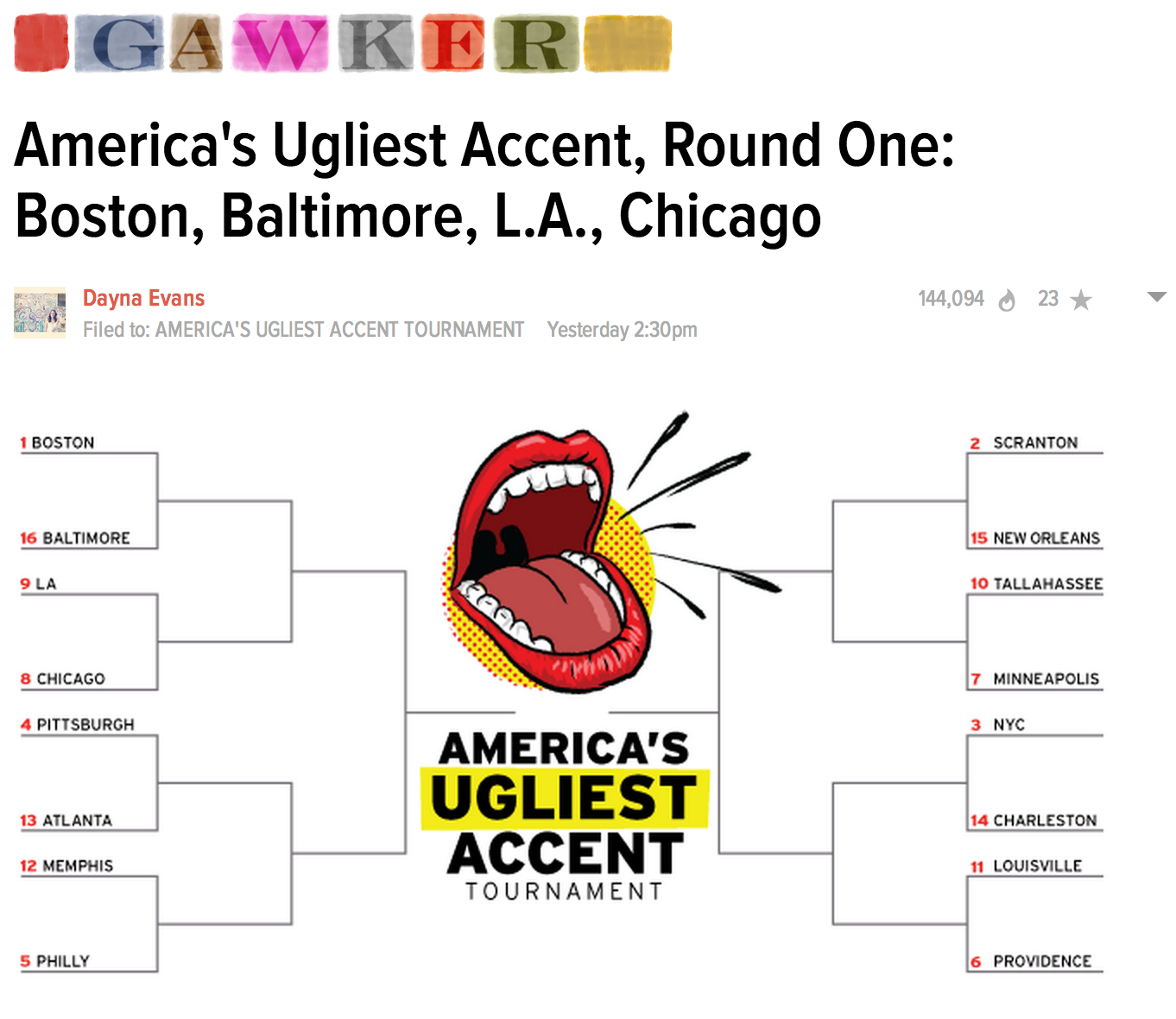 If you read past the headline, it gets even worse. I won't always reply to examples I find of gross linguistic discrimination like this, because if I did it'd be a full time job. But I noticed that in the introduction they'd linked to a New York Times column that references a paper that I co-authored on the Philadelphia dialect. I didn't think the NYT column was appropriately respectful, and I said so on Language Log at the time.

The NYT columnist wasn't too happy about what I said, but I feel that I have an ethical obligation to the people who invite us into their homes and are generous with their time and stories, to provide them with a vigorous public defense if their communities and the way they speak are ridiculed as a result. Moreover, language shaming pieces like this Gawker tournament only poison the waters for future sociolinguistic research, especially if our names as researchers are attached onto them in some way.

And as I was writing up some notes for this response, and followed more links from the Gawker pieces, I was really shocked by how many articles they've linked to that are popular writeups of sociolinguistic research, usually including interviews with one or more sociolinguists! It's like half my facebook friends list in there! It feels so defeating to see these generally positive articles and interviews utilized to prop up an exercise as ugly and mean spirited as this one.

Anticipating some reactions to this post, no, I'm not some grey humorless lump. But just because something is framed as a game doesn't make it fun, and it doesn't make it funny. For example, take Gawker's paragraph about New Orleans:


New Orleans is a steaming, fetid stew of aural bile, home to everything from the deep Cajun bayou accent to the Yat dialect, which derives from Irish, French, German, and even Italian into one completely incomprehensible mess. You need only watch this clip on the number of ways residents pronounce the city's name and neighborhoods and read this excellent article on the hodgepodge of New Orleans' accents to see how varied, and uniformly ugly, it all is.

Even if there was some intrinsic humor to that paragraph, instead of just raw nastiness, it would be important to reflect on who we're making fun of, and why. And on that count, I think the fella who compiled the Yat dictionary summarizes it well:


It's a working class language, probably, is what it amounts to.

And of course, that's what linguistic discrimination is really about. Maybe it's not always about class, but it's never really about language. It's about the kind of people who speak it. Predictably, the kinds of accents and languages which get dumped on the most, and get branded the "ugliest," always wind up being spoken by socially disadvantaged people. What exactly did this woman in particular do to deserve having a candid video of her slapped up on Gawker as an example of just how "ugly" the Chicago accent is? She works in a warehouse supermarket, that's what.

And this isn't a consequenceless game either. "America's Ugliest Accent Tournament" just puts a laughing face on a serious problem of discrimination that has economic and personal consequences for real people. To choose one example I'm familiar with, Anita Henderson did a study where she surveyed hiring managers in Philadelphia, playing them tapes of potential job applicants, and asked them to rate them on their job suitability. The topline summary from the abstract:


Those who sound Black are rated as less intelligent and ambitious and less favorably in job level.

In her textbook English with an Accent, Rosina Lippi-Green sums up my own opinion on the matter, but I've added some emphasis.


If as a nation we are agreed that it is not acceptable or good to discriminate on the grounds of skin color or ethnicity, gender or age, then by logical extension it is equally unacceptable to discriminate against language traits which are intimately linked to an individual's sense and expression of self.

How's this different from these other examples?

A few of the supporting links from the Gawker piece are personal websites that are called "How to talk [City]" or "The [Dialect] Dictionary," put together by enthusiastic speakers of the area themselves. They tend to have a self deprecating tone, so isn't that similar to the Ugliest Accent Tournament? It sure as hell isn't! First of all, even if those personal sites do have a poking fun tone, the fact is the dialect must be important to the person putting together the site, or else they wouldn't have spent the time documenting it! Their self deprecating tone could either be due to the general difficulty of expressing seriously how important a topic is to you, or to their internalized linguistic insecurities driven by things like America's Ugliest Accent Tournament. Moreover, Gawker is a really large media organization, and should be taken to task if only due to their profile and influence.

Sociolinguists ask people what they think about accents and dialects too. It's a subfield sometimes called Perceptual Dialectology. Isn't that kind of the same? Don't even start! A goal of sociolinguists is to understand the social landscape of language as well as we can, and that includes people's sometimes crummy attitudes about it. But if we have a goal, it's to critique those attitudes, not revel in them in some kind of user engagement experiment so that we can go cash in our pageviews with advertisers.

Real quick, let's contrast the overall tone of the America's Ugliest Accent Tournament with what I would call the fundamental sociolinguistic outlook on speakers. I think Bill Labov summed it up nicely at the end of his 2009 Haskins Prize lecture (go listen to it if you haven't already).


No matter who you are, you all sound disgusting.

What to do about it?