Sometimes I play with non-linguistic data sets recreationally. It's a totally valid hobby! I tend to gravitate towards data on the disparities between men and women, because gender equality is something that matters to me.

I've had this one data set for a while which I got from the Guardian Data Blog. It's 2006 data compiled by Unesco on men and women across a number of indicators. The ones of particular interest to me were student enrollment and estimated earned income. The student enrollment data is the percentage of potential students who are currently enrolled as students.

So, for each country for these two indicators, I calculated the ratio of Female/Male, to have one comparable measure. And then I took the log of the ratio, cause that's a good thing to do. 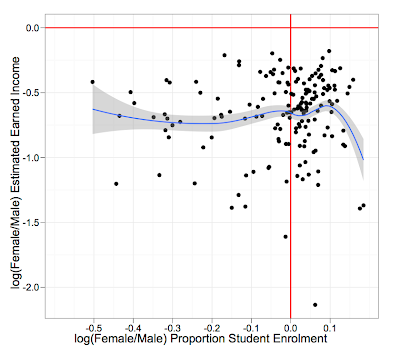 The answer is nothing. And these are not all high income, high education countries either. These are global estimates, not just OECD countries.

On this graph, the red lines indicate total equality, a 1:1 ratio. What's especially striking about this graph is how many countries are cluster on the right of the red line. There are a lot of countries where more women are enrolled as students than men. But those countries have no better income equality on average than those countries with extreme education inequality! 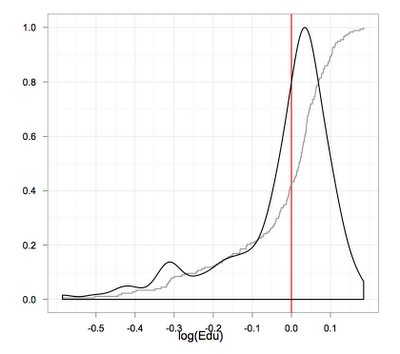 In about 60% of the countries in the world, more women are students than men! The US is one of these. Maybe you've heard about it. They're calling it the "crisis of boys". Quite a crisis for boys, that on average they have about 90% the education, but 156% of the money.

I wonder what this means for the education panacea for world problems.
Posted by JoFrhwld at 2:36 PM 1 comment: