Have you been in a Wawa's?

I would like to pre-empt all discussion here by saying that this blog post is strictly motivated by linguistics, and has no relevance to the US presidential election.

This video of Mitt Romney speaking about his experience in a Wawa has been floating around my newsfeed this week.


Full Disclosure: Wawa is my convenience market of choice.

What strikes me most about this video is the fact that Romney repeatedly said "Wawa's" even though the name of the store is just "Wawa" with no "s."  First, there's the linguistic issue of why this was such a natural mistake for Romney to make. Second, there's the sociolinguistic issue about why this particular mistake seems so egregious.

On the first point, there is clearly a strong tendency for store names to be formed in the possessive, indicating their ownership (or at least that's the origin). For example, "Macy's" was founded by Rowland Hussey Macy, "Wanamaker's" was founded by John Wanamaker, etc. However, not all stores which have names clearly formed in the genitive follow the ordinary orthographic rules for possessives.  For example, "Starbucks" is named after the Moby Dick character Starbuck, but the official name doesn't have an apostrophe. Similarly, JCPenney, which today isn't formed in the genitive, used to go by "Penneys" according to this logo from Wikipedia, also lacking the apostrophe.

Perhaps this is some kind of specialized "commercial genitive," I don't know.

At the same time, there are a lot of store names which are not formed in the genitive for some reason or another. One example someone brought up to me is "Nordstrom," which has no "s" even though it was founded by John Nordstrom. It's a little mysterious to me why this might be, except its original name was "Wallin & Nordstrom" (as in Carl Wallin and John Nordstrom), and coordination structures wreak havoc on everything. A similar story could be told for "Barnes & Noble."  In fact, the one kind of business that I know to be named after coordinated personal names are law firms (like "Dewey, Cheatum & Howe") which seem to never be formed in the genitive. There's also this blog post from Linguism which discusses the question of which store names get formed in the genitive and which don't, and he concludes that store names which are originally acronyms, like "Asda" and "Tesco" and foreign imports, like "Aldi" are less likely to be in the genitive.

At the same time, there is also a lot of asymmetric variation. People seem to be likely to form an officially non-genitive store name in the genitive, but not vice versa. How many of you would blink if someone said "I went shopping at Aldi's."? But no one would say "I went into a Starbuck."


Update: Ben Zimmer informed me on Twitter that the "Friendly Ice Cream" company officially changed their name to "Friendly's" perhaps because that's what all their customers called them anyway.

@JoFrhwld @gphemsley @literalminded Hmm, I may be wrong about Church's Chicken: bit.ly/aPks92 But Friendly -> Friendly's is legit.

According to this slideshow from the Boston Globe, the name change happened in 1989.
The point of all this is that Romney was wading into very muddy linguistic waters when he started talking about Wawa, and it's not surprising he screwed it up.

Which brings us to the second point: Why was saying "Wawa's" such a big deal? I just said that I wouldn't blink an eye if someone said "Aldi's" and that's basically the same kind of error. But, and I'm trying to speak here as a Philadelphian and Wawa devotee, not as a partisan hack, when I heard him say "Wawa's" my reaction was "Oh, he doesn't know how it works."

I think what it comes down to is that where there is variation, there is complexity, and where there is complexity, the ability to successfully navigate complexity the right way is an important social signal that you are the right kind of person. Consider, for example, the needlessly complex language surrounding Twitter, and the communal paroxysm of self satisfaction when a politician says "I sent out a twitter to my followers," or refers to the service as "Tweeter."

I don't think that reaction, or the reaction to Romney saying "Wawa's," is fundamentally different from the dirty word in linguistics: prescriptivism. A lot of prescriptivism is specific discrimination against politically, economically and socially marginalized people, but a lot of it also comes out of nowhere, and just turns into a really complex game that people play for the sake of showing they can play it. So be cautious, fellow linguists, because today's "Wawa's" and "Tweeters" are tomorrow's split infinitives and passive voice.
Posted by JoFrhwld at 6:12 PM 6 comments: 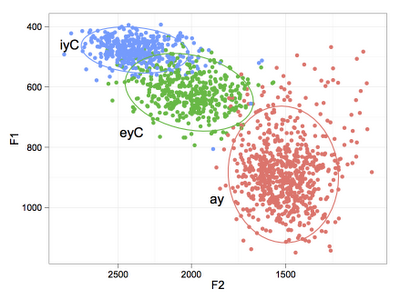 For a black and white image, however, it's trickier. I don't usually find grey color scales to be sufficiently different for a plot like this, so I'd go for different point shapes. Unfortunately, the default shape scale in ggplot2 isn't very distinct in this case. 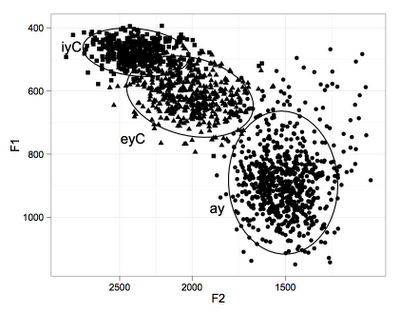 My first strategy to improve things was to add a custom shape scale, with alternating empty vs solid point shapes. 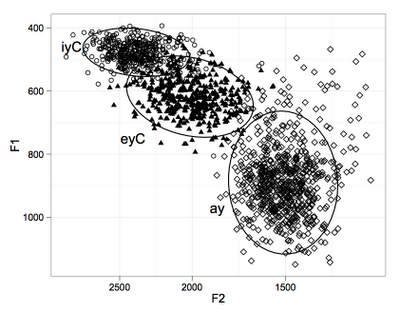 Better, but not great. All the overplotting of the empty point shapes creates this awful indiscriminate mash in the middle of the clusters.

My solution to this problem was to use filled points. While point shapes 1 and 5 in R correspond to an empty circle and an empty diamond, respectively, point shapes 21 and 23 correspond to a filled circle and a filled diamond, respectively, where the fill color and the border color can be different. So, I used shapes 21 and 23 instead of 1 and 5, and set the fill color to be white. 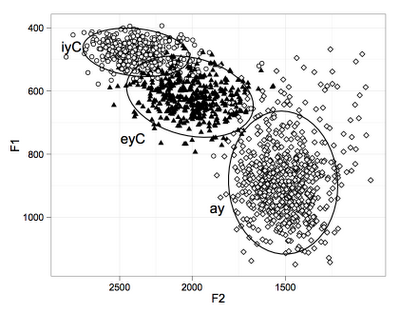 I think it's a big improvement. Here's one more iteration, filling the points with a light grey shade instead of white, just for some aesthetic appeal. 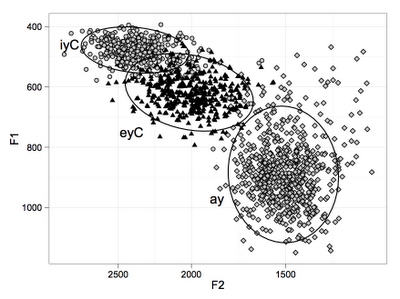 Posted by JoFrhwld at 5:21 PM No comments: