Saturday night, Tina Fey and Jimmy Fallon appeared on Weekend Update as "White Women from Suburban Philadelphia." Apparently suburban white women are the "the swing vote within the swing vote" which was the premise for having them on the show. It seemed like it was also at least partially to make fun of Jimmy Fallon's softball treatment of Trump.

I'm blogging about the sketch in appreciation of Tina Fey's performance of the Philadelphia Accent. First off, you should watch the sketch:

Over at AV Club, they criticized both Fey and Fallon for their accents:


Despite how the two pronounced “hoagies,” the performances (and accents) were all over the place, with Fey not bothering to do hers once she launched a Fey-esque attack on Mike Pence’s anti-gay, anti-woman agenda.

The sketch might not have been funny, and Fallon clearly didn't know what he was doing, but Tina Fey was on point, in my professional opinion. It's not surprising Fey should be able to perform the accent since she's originally from Upper Darby, which is right next to Clifton Heights in Delaware County. That corner of DelCo actually has an interesting place in the study of the Philadelphia Dialect. R. Whitney Tucker wrote one of the earlier descriptions of the dialect in 1942 while he was at Pennsylvania Military College, now called Widener University. At the time, he said


I think that the real heart and centre of this [Philadelpia] dialect was originally, and still is, a few miles to the south, in the eastern part of Delaware County.

So how did Fey (and Fallon) deal with the accent? I previously blogged about Chris Matthew's native performance of the dialect by running through a list of the dialect features, but this time I ran the sketch through the FAVE-suite! So up ahead is a detailed phonetic analysis of Fey's performance.

First up, here's Fey's over-all vowel system. I look at plots like these all the time, so this is inherently meaningful to me, but I'll try to break it down a bit. 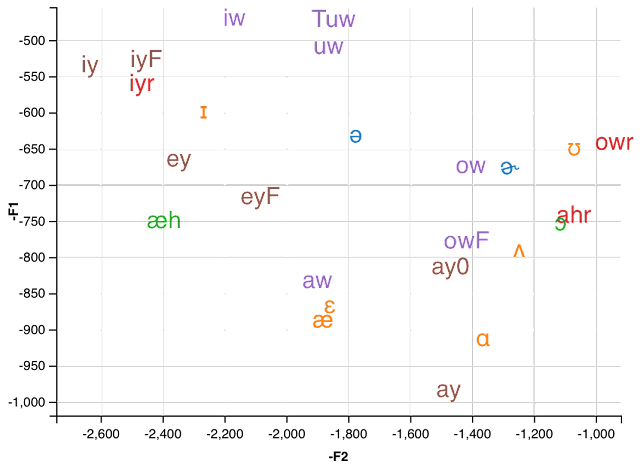 There's  a few top-line things I see here. First off, she's moved her /ahr/ vowel (as in start and far) way up to be right next to her /ɔ/ (you can hear it when she says "in charge"). That is exactly correct, but her /owr/ could be higher, since pore, poor, pour are all merged in Philly, and is usually the highest backest vowel in the system. 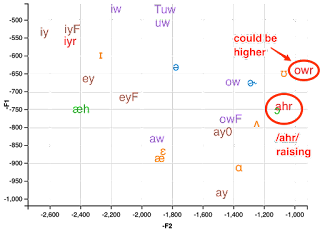 She's also got a nice separation of /ay/ (as in ride) from /ay0/ (as in write) in a Canadian Raising pattern (you can hear it when she says mice). This is one of the more established features of the Philly accent now. There's also an /ey/ (as in face) and /eyF/ (as in gay) separation. This is less commonly discussed, but before consonants, eight is pretty similar to eat in Philly, while word finally (like gay) it's much lower, almost southern sounding. But, when I look at Fey's /ey/, /eyF/ difference in detail, it's not especially consistent. 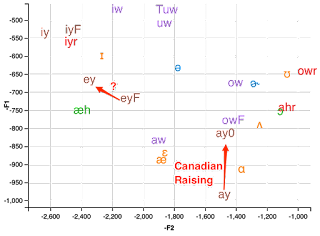 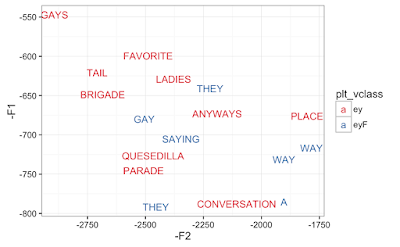 One thing that looks like she's overly doing it is /uw/ fronting (as in scooter). She has it as far front as her /Tuw/ (as in do). Philadelphia is known for its /uw/ fronting, but usually it is much fronter following coronals than it is elsewhere, so I would expect to see /uw/ further back here. 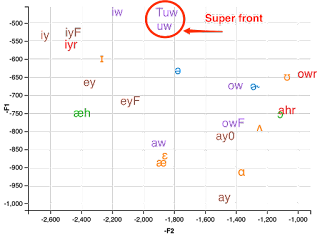 She's also got some kind of /ɛ/ /æ/ merger that I can't account for. That's not a Philly thing that I know of. One last thing that caught my ear is some kind of consistent /ʌ/ backing (as in Trump). That isn't usually described as a feature or ongoing change of the dialect, but it sounds authentic to my ears. 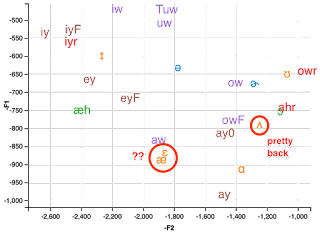 But let's get into more of the guts of the system. In the over-all vowel plot, there's a really good split between the tense and lax short-a (/æh/ and /æ/ respectively). But the Philadelphia split-æ system is complicated, but partially overlapping with related systems. So how'd she do in detail? 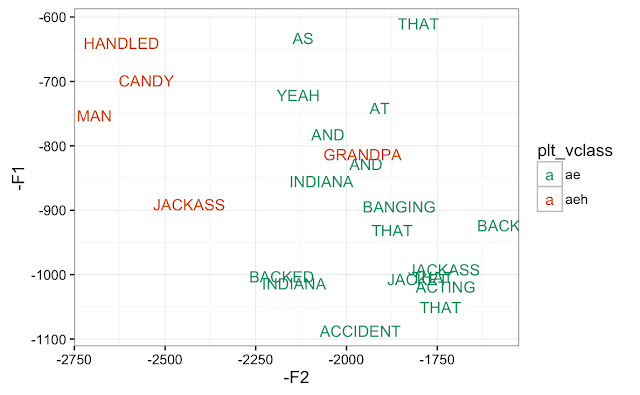 Based on limited data, I'd say she more or less nailed it. Her /æ/ before /s/ in jackass is tenser than the  one before /k/ (although, a friend on facebook said they didn't think it sounded authentic). Her /æ/ in grandpa is a bit lax, but I think that's forgivable given the preceding consonant-liquid cluster. Most impressively, she's got a properly lax [æ] in her two repetitions of Indiana, and in banging. I would expect those to be the most likely to be messed up by someone trying to do an impersonation.

Incidentally, I think it could be the fact that she correctly had lax [æ] in Indiana that the AV Club thought she stopped doing the accent, since most American accents would have tensing there.

Honestly, this distribution of data makes me think that she's just got the split system natively. I haven't tried to compare this performance to something less affected, so I can't tell if she just always does this.

I also looked at her vowel dynamics a bit. 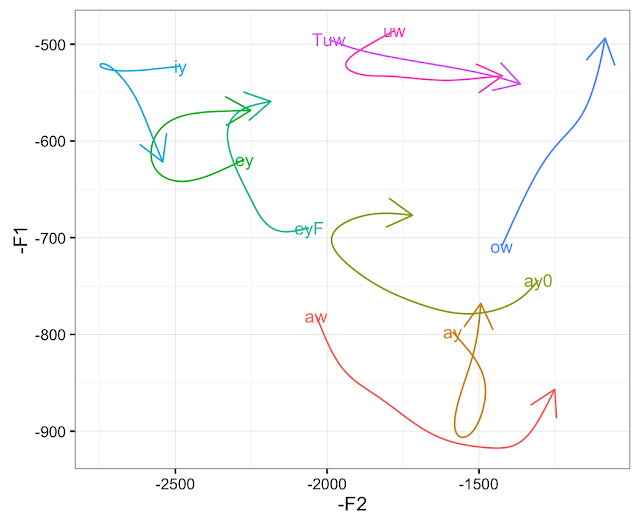 A few things jump out. First, I think she did a really good job on the phonetic quality of /aw/ (as in clown). I've found that it's basically a falling diphthong, and the most advanced tokens have a later F1 maximum, which she pretty much nails here. She also has a clear Canadian Raising pattern between /ay/ and /ay0/, with maybe some monophthongization of the pre-voiced tokens that's producing a strange trajectory. It's also possible that she's doing the /ey/, /eyF/ split in the formant dynamics, but I wouldn't put too much stock in that. 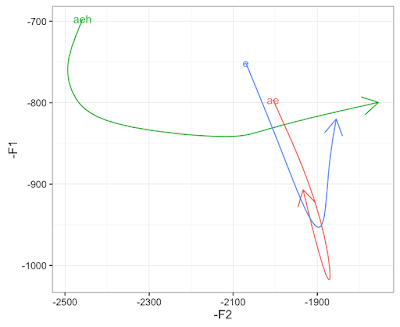 Clearly very good dynamic differences between /æ/ and /æh/. I included /ɛ/ here (labelled "e" in the plot) just to get another look at that weird /æ/~/ɛ/ merger. It seems to be there more or less in the dynamics as well. I really don't know what's happening there.

I also did some quick and dirty coding of Fey's consonants. One of the things I noticed is that Fey was doing quite a bit of (dh) stopping (a dental stop in words like the and this). When I tallied it up, it looked like it was actually about 20% of her tokens, which is a bit low for Philadelphia.

She also had only one /str/ sequence, but she backed it to a very clear [ʃtr] in street.

I haven't tried to touch her /l/ vocalization or darkening at all, cause I think I have a tough time with that perceptually, and I don't have a fancy script for analyzing it like I do for vowels.

Meanwhile there's Jimmy Fallon. I'm not going to go into detail with him, cause as he said in the sketch, his accent was all messed up. Here's his overall vowels, and his dynamics. 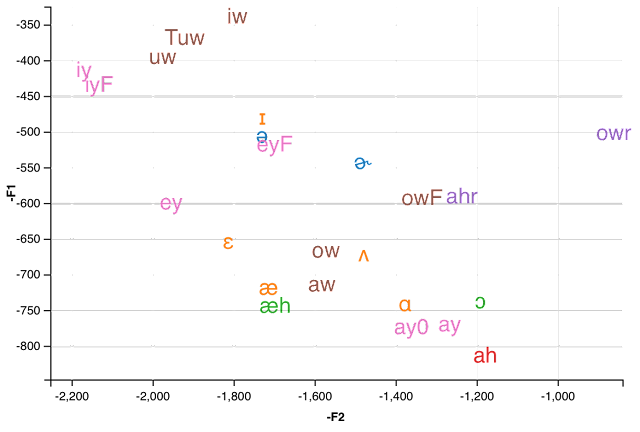 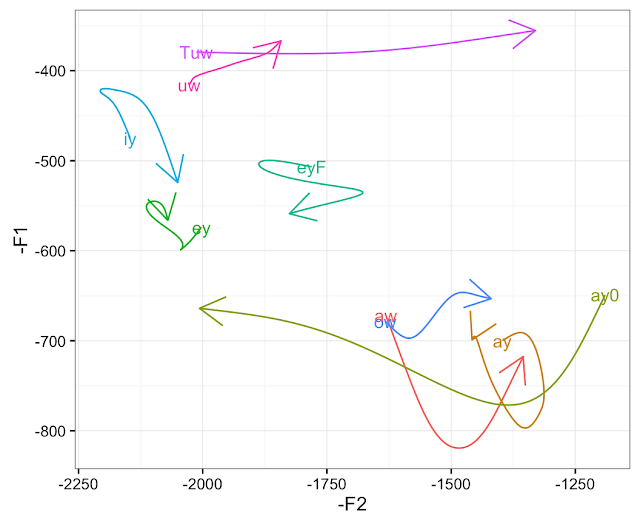 Yeah, so it looks like he's just vacating his back vowel space, and also monopthongizing a lot of things? Basically, this isn't anything.

In conclusion, Tina Fey nailed it, and Fallon didn't know if he was coming or going.
Posted by JoFrhwld at 7:13 AM 3 comments: