I was just sent a music video for Sxip Shirey's song I live in New York City. It's a pretty cool song (even if it is about NYC). Shirey is apparently known for his creative instruments, and this song features his playing-a-harmonica-into-a-bullhorn-aphone (my own coining).

But this post isn't about playful morphology. At 4 seconds into the video, a scene flashes by which displays AAVE in big green neon lights. 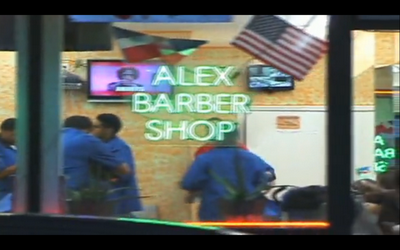 Of course, the possessive marker "'s" is frequently (or usually?) omitted in AAVE. Thus, what would be "Alex's Barber Shop" in White NYC English is "Alex Barber Shop" in AAVE.

I find examples of dialectal features that are carved into stone (or neon signs or whatever) really interesting, specifically because of how much effort is involved in putting them there. Talk is really cheap compared to the cost of creating a neon sign. Some people might argue that dialects like AAVE are just sloppily spoken Standard English, but could you really argue that the sign says "Alex Barber Shop" due to laziness? I've never owned a barber shop, but if I did, I'd definitely check the neon sign order form three or four times to make sure that it said exactly what I wanted it to say. Therefore, I conclude that Alex's sign says "Alex Barber Shop" because he meant it to, and he must have invested a lot of energy and money to make sure it said exactly that.

This also reminds me of something Bill Labov talks about1. He has a presentation where he puts up a picture of a Dunkin' Donuts sign. Then he asks us why Dunkin' Donuts decided to call themselves Dunkin' Donuts. "Because," he says, "everyone knows that Dunkin' Donuts taste better than Dunking Donuts."

I wonder, then, whether everyone knows that it's better to go to Alex Barber Shop than Alex's Barber Shop.

1. I talk a lot about things Bill Labov talks about, but can I really help it? Can anybody?
Posted by JoFrhwld at 11:18 PM No comments:

This week on Car Talk, there was a wonderful moment that exemplified a feature of the Boston dialect, inter-generational conversations about language change, and the importance of covert prestige.

At 22 minutes into the show, someone calls in with the name Cara (or Kara or something). While trying to figure out whether to pronounce her name as C[a]ra or C[æ]ra, Tom brings up something his kids give him trouble for. Here's a transcript of the relevant part, with the audio below.


Of course, Tom's kids are making fun of his broad-a system, which is a receding feature of Boston English. The really interesting thing about Tom's conversation with his kids is that they are informing him of the new norm. He's supposed to say "c[eə]n't" you see. Typically language policing runs in the opposite generational direction. However, as Bill Labov has casually mentioned, usage notes for incoming norms are one of the few things for which parents will take their children's advice, another being makeup.

The other interesting thing here is Tom's kids' attitude towards the classic Boston broad-a. They think it sounds pretentious. Even though it is a conservative form of the local dialect, I suspect broad-a indexes "British" for Tom's kids. But when a Brit uses broad-a, I'm sure Tom's kids, along with most Americans, think it sounds fancy. Why does it sound pretentious when Tom uses it?

Because who does he think he is! It's important to not sound too trashy or lower class, but it's also important to not try to sound better than you are. A related, but different example of this tension comes from Suzanne Evans Wagner's dissertation. Short-a in Philadelphia is tensed from [æ] to [eə] in many environments, including before voiceless fricatives like /f/. Wagner's dissertation includes this story of a Philadelphian returning home after a year at college:

Abandoning the authentic Philadelphia short-a required a swift and firm response from this girl's mother. In the context of Tom's story, it's interesting to wonder about what circumstances had to obtain for a form which is actually authentic to be reanalyzed as foreign by the younger speakers in the community.
Posted by JoFrhwld at 4:49 PM 1 comment:

On Wednesdays, I have two free lunches, one after another. The first is associated with Penn Language and Communication IGERT program. The second is called Splunch, for speech and phonetics lunch, hosted by the phonetics lab.

At football games, Penn undergrads throw slices of toast onto the field. It's a tradition that started after alcohol was banned in the football field. During the fight song (or the school song, or some song like that), there's a line that goes "Here's a toast, to dear old Ben[jamin Franklin]".  The engineering department has actually designed a toast zamboni to clean up all the toast from the field.

What ties these two thoughts together is that there is a group of students who want to end the Toast Toss.  I read some of their flyers today, which included some statistics on poverty and hunger in Philadelphia. The line that caught my eye said "What does the Toast Toss mean about Penn?" I'm struck by the fact that I had never reflected on how frivolously throwing bread around, or receiving two free lunches in one day might seem to a chronically poor and hungry person living in my own city.
Posted by JoFrhwld at 3:19 PM 2 comments:

More on the n-word

I made a rather long blog post about Dr. Laura's "use" of the n-word a few days ago. I talked about how you could reason to a conclusion from theoretical pragmatics that Dr. Laura should never have (technically) mentioned the n-word, because it doesn't have to be used to deliver its expressive content. I've just experienced some evidence that for some people, any reference to the words existence is enough to deliver its expressive content.

In one of the comments, a site moderator said


Some others: codger, greaser, hater, muckraker, poser, not to mention the “N-word”, which ends in -er.


The "N" word is offensive! As are the others but, in particular, the reference to the "N" word. I am disappointed [...]. I should think a moderator would steer well clear.

Again, like with Dr. Laura, the moderator didn't use use the n-word, he merely mentioned it. But, he also used what I assume is the standard taboo avoidance term: n-word. Even this was enough to offend some commenters.

P.S. John McWhorter has a bit about the history use of the n-word and other racial slurs as in-group terms.
Posted by JoFrhwld at 11:54 PM 1 comment: