Linguistic Notation Inside of R Plots!

So, I've been playing around with learning knitr, which is a Sweave-like R package for combining LaTeX and R code into one document. There's almost no learning curve if you already use Sweave, and I find a lot of knitr's design and usage to be a lot nicer.

I wasn't going to make a blog post or tutorial about knitr, because the documentation is already pretty good, and contains a lot of tutorials.  However, I've just had a major victory in incorporating linguistic notations into plots using knitr, and I just had to share. I'll show you the payoff first, and then include the details.

First, I managed to successfully use IPA characters as plot symbols and legend keys. 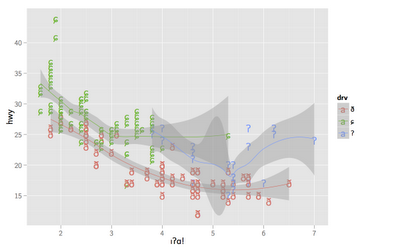 The actual data in the plot is on car fuel economy, but that's not the point. Look at that IPA!

Then, I tried to expand on the principles that got me the IPA, and look what I produced. 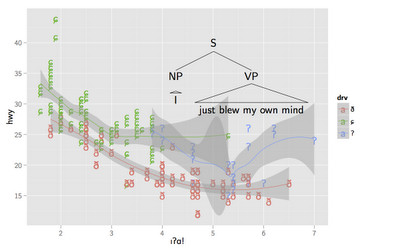 Yes, that is a syntax tree overlaid on top of the plot. But why stop there when you could go completely crazy? 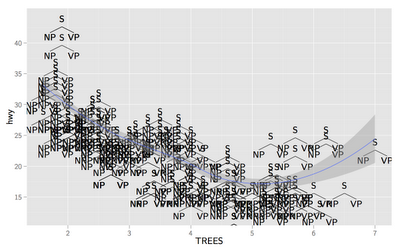 Like most linguists who use LaTeX, I already know how to include IPA characters and draw syntactic trees in a LaTeX document. It's simple as

What is so cool about the tikz device is that it lets you define these notations in LaTeX syntax, and then incorporates them into R graphs. Here are the important code chunks to include in your knitr document to make it all work.

Early on, load the ggplot2 and tikzDevice R packages.

Then, you need to tell the tikz device which LaTeX packages you want to use.


3 — Define the plotting elements in LaTeX

We're done with the hard part. Now, it's as simple as faking up some data...

...and plotting it, using the tikz device.
Or, in the case of the syntactic trees,

Here's some source code to embed these plots in a beamer presentation. To compile a .tex document from the .Rnw source, you can run
Then, just compile the .tex document however your little heart desires.

As if this weren't awesome and easy enough yet, it's possible to compile the whole document in one click using RStudio, as outlined on this knitr page. You'll need to download the development (i.e. not guaranteed to be stable) RStudio release, then set the compilation option to use knitr, and you're done!

I have to say that from  a practical standpoint, I've found writing Sweave documents in RStudio to be a much better experience than what I was doing before, because I can run and debug the R code from within the .Rnw source document. No need to go flipping back and forth between a Tex editor and R.

P.S. I highlighted the code above at http://www.inside-r.org/pretty-r
Posted by JoFrhwld at 5:55 PM