It seems to me that in the past few years, the empirical foundations of the social sciences, especially Psychology, have been coming under increased scrutiny and criticism. For example, there was the New Yorker piece from 2010 called "The Truth Wears Off" about the "decline effect," or how the effect size of a phenomenon appears to decrease over time. More recently, the Chronicle of Higher Education had a blog post called "Is Psychology About to Come Undone?" about the failure to replicate some psychological results.

These kinds of stories are concerning at two levels. At the personal level, researchers want to build a career and reputation around establishing new and reliable facts and principles. We definitely don't want the result that was such a nice feather in our cap to turn out to be wrong! At a more principled level, as scientists, our goal is for our models to approximate reality as closely as possible, and we don't want the course of human knowledge to be diverted down a dead end.

But, I'm a linguist. Do the problems facing psychology face me? To really answer that, I first have to decide which explanation for the decline effect I think is most likely, and I think Andrew Gelman's proposal is a good candidate:


The short story is that if you screen for statistical significance when estimating small effects, you will necessarily overestimate the magnitudes of effects, sometimes by a huge amount.


I've put together some R code to demonstrate this point. Let's say I'm looking at two populations, and unknown to me as a researcher, there is a small difference between the two, even though they're highly overlapping. Next, let's say I randomly sample 10 people from each population, do a t-test for the measurement I care about, and write down whether or not the p-value < 0.5 and the estimated size of the difference between the two populations. Then I do this 1000 more times. Some proportion (approximately equal to the power of the test) of the t-tests will have successfully identified a difference. But did those tests which found a significant difference also accurately estimate the size of the effect?

For the purpose of the simulation, I randomly generated samples from two normal distributions with standard deviations 1, and means 1 and 1.1. I did this for a few different sample sizes, 1000 times each. This figure show how many times larger the estimated effect size was than the true effect for tests which found a significant difference. The size of each point shows the probability of finding a significant difference for a sample of that size. 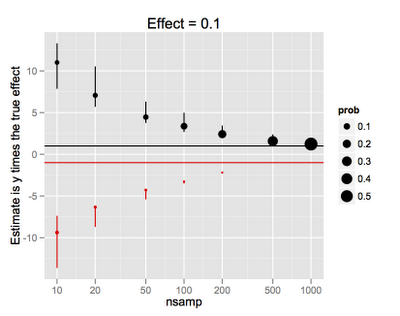 So, we can see that for small sample sizes, the test has low power. That is, you are not very likely to find a significant difference, even though there is a true difference (i.e., you have a high rate of Type II error). Even worse, though, is that when the test has "worked," and found a significant difference when there is a true difference, you have both Type M (magnitude) and Type S (sign) errors. For small sample sizes (between 10 and 50 samples each from the two populations), the estimated effect size is between 5 and 10 times greater than the real effect size, and the sign is sometimes flipped!

Taking the approach of just choosing a smaller p-value will help you out insofar as you will be less likely to conclude that you've found a significant difference when there is a true difference (i.e., you ramp up your Type II error rate, by reducing the power of your test), but that doesn't do anything to ameliorate the size of the Type M errors when you do find a significant difference. This figure facets by different p-value thresholds.

So do I have to worry?

And in general, I don't think the field has exhausted all of our sledgehammer effects. For example, Sprouse and Almeida (2012) [pdf] successfully replicated somewhere around 98% of the syntactic judgments from the syntax textbook Core Syntax (Adger 2003) using experimental methods (a pretty good replication rate if you ask me), and in general, the estimated effect sizes were very large. So one thing seems clear. Sentence 1 is ungrammatical, and sentences 2 and 3 are grammatical.
And the difference in acceptability between these sentences is not getting smaller over time due to the decline effect. The explanatory theories for why sentence 1 isn't grammatical may change, and who knows, maybe the field will decide at some point that its ungrammaticality is no longer a fact that needs to be explained, but the fact that it is ungrammatical is not a moving target.

Maybe I do need to worry


I should say right off the bat that all of these studies are not perfect replications of Guy's original study. They have different sample sizes, coding schemes, and statistical approaches. Mine, in the last row, is probably the most divergent, as I directly modeled and estimated the reliability of j and k using a mixed effects model, while the others calculated pj and pk and compared them to the maximum likelihood estimates for words like kept and pact.

But needless to say, estimates of j and k have not hovered nicely around 2 and 3.
Posted by JoFrhwld at 11:03 AM